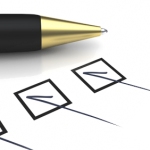 New York City Council members are considering legislation – Introductory Bill Number 261 (“Int. No. 261”) – that would amend the administrative code of the city “in relation to prohibiting discrimination based on one’s consumer credit history” and prevent employers from using credit checks in employment decisions. More information about the bill is available here: Int. No. 261.

Although similar legislation introduced last year did not pass, Int. No. 261 seems more likely to pass this year since 40 out of the 51 members of the Council are sponsors and New York City Mayor Bill de Blasio is supportive of the bill preventing credit checks during hiring. A Committee Report of the Government Affairs Division Commission on Human Rights about Introductory Bill Number 261 dated September 12, 2014 is available here: Committee Report 9/12/14.

As for penalties under Int. No. 261, employers found to have engaged in an unlawful discriminatory practice on the basis of consumer credit history in violation of the City’s Human Rights Law may be issued an order to “cease and desist” the unlawful discriminatory practice by the Commission on Human Rights. In addition, the Commission could require the employer to:

Failure to comply with such an order may result in a civil penalty issued by the Commission of:

A 2012 survey of HR professionals conducted by the Society for Human Resource Management (SHRM) revealed 13 percent of respondents conducting background credit checks on all prospective employees while 34 percent of respondents conducting background checks on candidates for certain positions. The survey is available here: Background Checking — The Use of Credit Background Checks in Hiring Decisions.

Job applicants that undergo credit checks can get caught in a “Catch-22” situation where they have bad credit histories because they cannot get a job but cannot get a job because they have bad credit histories. Employment Screening Resources® (ESR) has co-authored a white paper with LexisNexis titled ‘The Use of Credit Reports in Employment Background Screening’ describing the protections job applicants have regarding credit reports. The complimentary whitepaper is available here: http://www.esrcheck.com/Stay-Updated/Download/.