Nearly two-thirds – 64 percent – of U.S. military veterans employed in white collar jobs in the civilian workforce say they are not using skills that could be relevant in the corporate world while more than one-third – 38 percent – say corporate leaders are incapable of seeing their full potential, according to findings in the book Mission Critical: Unlocking the Value of Veterans in the Workforce from the Center for Talent Innovation that highlights the unique challenges military veterans face in civilian workplaces.

“The extraordinary skills veterans developed while in the military, and the commitment that compelled them to serve their country, fail to translate into career progression,” Julia Taylor Kennedy, co-author of the book, states in a press release about the book’s findings. “They feel underutilized and underappreciated. No wonder the veterans we surveyed ‘checked out,’” adds Taylor Kennedy, senior vice president and senior fellow at the Center for Talent Innovation.

The survey found that the skills veterans frequently say they have but do not use – particularly technical and leadership skills that translate into a workplace setting – include: Social media; Language fluency; Computer programming; Accounting; Statistical Analysis; Managing the career development of others; Transparent decision-making; Relationship/ stakeholder management; and Team building. The key findings of the survey point to additional factors contributing to the “stalling out” of veterans:

Veterans often confront obstacles in their personal lives that make connecting to their civilian teams much harder. For example, 31 percent of veterans know other veterans who have committed suicide. Mission Critical: Unlocking the Value of Veterans in the Workforce features companies such as Boehringer Ingelheim, Booz Allen Hamilton, and Wounded Warrior Project that are leveraging their veteran talent, as well as programs from corporations working to support veteran employees.

“Any company can hire a veteran but not many are successfully utilizing the immensely valuable skills and experiences that veterans bring to the table,” Mike Abrams, U.S. marine, founder of Four Block, and co-author of the book, states in the press release. “Companies that identify the key barriers that are inhibiting veterans in the workforce can unleash the innovation potential from this unique and diverse workforce,” adds Abrams, who joined the U.S. Marine Corps after the attacks on September 11, 2001.

The Center for Talent Innovation (CTI) is a non-profit think tank based in New York City. The CTI flagship project Task Force for Talent Innovation is a private-sector consortium focused on helping organizations leverage their talent across the divides of gender, generation, geography, and culture. The 86 global corporations and organizations that constitute the Task Force represent nearly six million employees and operate in 192 countries around the world. To learn more, visit http://www.talentinnovation.org/. 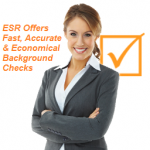 ESR Thanks U.S. Veterans for Their Military Service

Employment Screening Resources (ESR) thanks the men and women who are veterans of the U.S. military for their service to their country. According to the History of Veterans Day page on the U.S. Department of Veterans Affairs website, Veterans Day is an official United States federal holiday that honors people who have served in the U.S. Armed Forces and is observed annually on November 11, a date that marks the anniversary of the end of major hostilities in World War I on November 11, 1918.