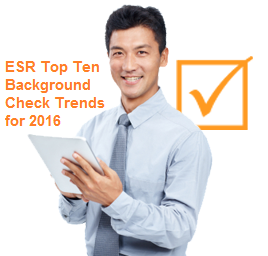 Social media background checks that examine online postings by users of popular websites like Facebook and Twitter will be in the national spotlight in 2016 in the United States due to domestic terrorist attacks such as the tragic San Bernardino, California workplace shooting that left 14 people dead. This is the number 6 trend selected by Employment Screening Resources® (ESR) Founder and CEO Attorney Lester Rosen for the 9th annual ESR Top Ten Background Check Trends for 2016.

“Social media background checks are easier said than done given the vast scope of the Internet and the billions of pieces of data available,” says Rosen, author of ‘The Safe Hiring Manual’ and a noted background check expert. “There is so much information available on social media websites and online searches that trying to locate actionable and meaningful data on a particular person is like trying to find a very small needle in a very large haystack while trying to take a sip of water from a firehose.”

The use of social media background checks became a hot news topic following a mass shooting at a holiday party in San Bernardino, CA on December 2, 2015. Pakistani-born Tashfeen Malik, along with her husband Syed Rizwan Farook, killed 14 people and injured 22 before both later died in a police shootout. Initially, ABC News reported there was widespread speculation that the visa background check for Malik allegedly failed to search publicly available social media messages that may have revealed a potential threat.

However, The Washington Post reports that Federal Bureau of Investigation (FBI) Director James Comey said during a news conference that Malik and Farook did not post public messages on social media about supporting jihad. “Those communications are direct, private messages. So far, in this investigation we have found no evidence of posting on social media by either of them at that period in time and thereafter reflecting their commitment to jihad or to martyrdom,” Comey said.

Regardless, the events created a great deal of interest in utilizing social media as part of performing background checks. The Hill reports that two U.S. Senators sent a letter to President Barack Obama asking him to include the vetting social media accounts as a part of visa background checks that read in part: “In an era where a growing number of communications takes place on Internet platforms, it would be foolish to ignore this goldmine of information. We understand that social media entries cannot be dispositive, but to ignore the information out of hand is unreasonable.”

According to Rosen – who founded ESR in the San Francisco, CA area in 1997 and is a frequent speaker on due diligence issues for employers – interest in social media background checks has risen steadily in the past few years. However, the call for widespread social media use in background checks does not necessarily take into account the practical and financial realities of scouring the Internet looking for usable data.

“First, the scope of data available is overwhelming,” Rosen warns. “Trying to narrow down a search so that it is relevant is difficult, time consuming, and expensive. There is simply no magic bullet or currently available technology solution that can create easily accessible ‘red flags’ that are a sign or warning of any impending danger or disaster. For one thing, not everything on the Internet has identifiers. Anyone can easily operate under pseudonym or false names. Even if a person somehow identified themselves, it is very easy to set privacy settings so that nothing is available on the public internet, creating a need to utilize legal procedures to go behind piracy settings to compel Internet Service Providers to reveal information.”

Rosen says that an additional practical issue is how to even spot a “red flag.” There are two common techniques that are used – automation and human review of flagged words or terms. If software is used to find key words, it can easily result in “false positives,” meaning a person or communication has been flagged that is not related to a threat in any way. Rosen says it is difficult for software to understand the context of a word and to program software to tell the difference between people who are a potential security threat and people who are merely discussing current events on their social media site.

“For example, a citizen may use the word ‘terrorist’ in a blog post in order discuss the evils of terrorism. If that word trips a ‘red flag,’ people are needed to review and evaluate the social media posting,” Rosen explains. “There is an enormous cost to hire enough human reviewers to go through every possible ‘red flag.’ Even if a whole army of online researchers are hired to review the social media profiles of visa applicants, the fact still remains that anything subject to human processes still has a certain margin of error. Certainly, if a person goes online and clearly identifies themselves by name or email address and posts threatening terrorist statements in no uncertain terms, that can more easily be flagged. But there is little to suggest that a potential person of interest will make such threats that easy to find.”

When applied to employment, the idea of using social medial background checks can create difficulties for employers. “When social media first became popular, many employers thought they had discovered a treasure trove of information on job applicants,” says Rosen. “However, they soon discovered that just because information exists online does not mean it can legally be used as part of the hiring process without any legal risks or that verifiable and actionable information could even be found.”

To say social media is wildly popular would be a vast understatement. According to online statistics portal Statista, there are more than 1.6 billion social media users worldwide and more than 160 million monthly users in the U.S. alone. Statista also revealed that the percentage of U.S. population with a social media profile increased from 24 percent in 2008 to 73 percent in 2015. Facebook is the most popular social network with over 1.18 billion monthly active users as of August 2015.

As a result, social media background checks are being used more than ever by employers. The 2015 Annual CareerBuilder Social Media Recruitment Survey revealed that 52 percent of employers use social media sites to research job candidates, up from 43 percent in 2015 and 39 percent in 2013. The survey also found that 35 percent of employers were less likely to interview applicants that they could not find online and 35 percent who screened with social media sent friend requests or followed candidates.

However, Rosen explains that many companies do not realize the potential risks associated with using social media sites and search engines to recruit and screen applicants. Employers need to examine the pros and cons of utilizing social media data. “The unrestricted use of social media background checks could well land an employer, human resources professional, or recruiter in hot water,” he warns. “Just because information is available on social media does not mean it is true or free of legal risks.”

Rosen educates employers using social media background checks on the potential dangers they may face that can include: Too Much Information (TMI) that can lead to discrimination allegations; Too Little Information (TLI); Privacy issues in the online world; “Computer twins”; Problems with requiring applicants to provide social media passwords; Infringing upon legal off duty conduct; Pre-texting and social engineering; Hurting employer brand, and; Issues with credibility, accuracy, and authenticity.

Rosen also offers steps for employers to take when considering using search engines or social media sites for screening to minimize the potential legal risks including: Written job descriptions that contain the essential knowledge, skills, and ability (KSA) required for the job; Documented training on how to avoid discriminatory hiring practices, and; Use of an in-house person not connected to hiring decisions to review social media sites to ensure discriminatory information is not given to decision makers.

“The bottom line when using social media background checks for employment screening is to proceed with caution,” says Rosen. “Employers should use social media background checks carefully or they could face potential legal landmines that could harm their business. Since there has yet to be a clear law or court case that sets forth how to proceed in this area, employers may want to approach social media with caution before assuming everything is fair game in the pursuit of candidates.”