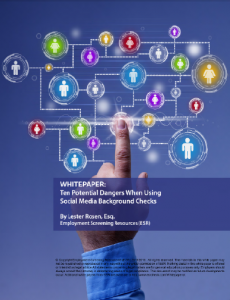 Since many employers are using the Internet to recruit and screen jobs applicants, Employment Screening Resources® (ESR), a global provider of background checks, has released an update of its complimentary whitepaper ‘Ten Potential Dangers When Using Social Media Background Checks’ to help them avoid legal risk online. The whitepaper is available for free download at http://www.esrcheck.com/Whitepapers/Social-Media-Background-Checks/.

“Employers have discovered a treasure trove of information on potential job applicants by using social media sites,” says Attorney Lester Rosen, ESR Founder and CEO and author of ‘The Safe Hiring Manual.’ “However, the unrestricted use of social media background checks could well land an employer, human resources professional, or recruiter in hot water.  Just because it is online does not mean it is true or free of legal risks.”

The SHRM survey also found the most popular social media used to recruit job candidates in 2015 was LinkedIn (96 percent), followed by Facebook (66 percent), Twitter (53 percent), and professional or association social networking sites (35 percent). For using social media to screen job candidates in 2015, LinkedIn was the most popular choice of employers (93 percent) followed by Facebook (63 percent).

The 2015 Annual CareerBuilder Social Media Recruitment Survey found more than half of employers – 52 percent – used social media to research job candidates while more than one-third – 35 percent – were less likely to interview job candidates if they were unable to find information about them online. Nearly half of hiring managers – 48 percent – found information online that caused them not to hire a candidate that included:

The survey also found almost one-third of hiring managers – 32 percent – found information online that caused them to hire a candidate that included:

The whitepaper defines social media as “forms of electronic communication such as Web sites for social networking and microblogging through which users create online communities to share information, ideas, messages, and other content such as videos.” Due to the growing popularity of social media, employers would be hard pressed to completely ignore information from popular social media websites such as:

Rosen founded Employment Screening Resources® (ESR) in 1997 in the San Francisco, California area. He has authored several whitepapers and is a frequent speaker on due diligence and background check issues as part of the “ESR Speaks” background check training program. He was chairperson of the steering committee that founded the National Association of Professional Background Screeners (NAPBS), and served as first co-chair.