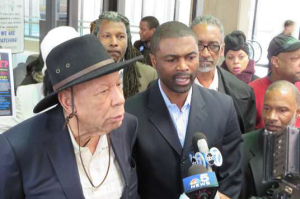 Illinois State Representative La Shawn K. Ford (D-Chicago) held a press conference on Sunday, March 13, 2016, with people who have a criminal background in America to call on presidential candidates running in the upcoming Illinois primary on Tuesday to make workforce re-entry issues a priority for the United States, according to a press release from Ford’s office.

“A criminal background in America is a disability that prevents citizens from living a productive life in America,” Representative Ford stated in the press release. “This is not about political gain – this is about justice. Americans with criminal records should be given a second chance if they have served their time and are fully committed to obeying the laws of the land.”

Ford then asked current presidential candidates for help. “Immigration, global warming, and many international issues are being debated, but we must ask our candidates running for President of the United States – who are asking for our votes – that they make issues dealing with re-entry of our returning and returned citizens a priority if our nation is to heal its wounds.”

Commissioner Howard C. Medley, a veteran with a Purple Heart, shared many issues that plague those with a criminal background. “I’m a black, 89 year old man, a Democrat and role model in the community. I was wrongfully convicted and jailed 28 years ago, and I still can’t live the American dream. I am trying to clear my name for a crime I did not commit in the first place.”

According to a 2012 survey from the U.S. Department of Justice, a total number of more than 100 million people have criminal history files in all fifty states, American Samoa, Guam, and Puerto Rico. The actual number of people with a criminal background in America may be less since an individual offender may have criminal records in more than one state.

ESR Founder and CEO Attorney Lester Rosen wrote a whitepaper titled “Ten Critical Steps for Ex-Offenders to Get Back into the Workforce” to assist job applicants with a criminal background re-enter society through employment. This complimentary whitepaper is available at www.esrcheck.com/Whitepapers/Ten-Steps-for-Ex-Offenders-to-Get-Back-in-Workforce/.