A Booneville, Indiana woman who was shocked to learn she would not be hired for a nursing job when an employment background check report revealed that she had “multiple felonies” – even though she insists she has “a squeaky clean criminal record” – has filed a class action lawsuit against her prospective employer that requested the background check, according to a story from The Indianapolis Star.

The Indianapolis Star reports Michele Petry filed a class action lawsuit in U.S. District Court for the Southern District of Indiana, Evansville Division against Indianapolis-based IDE Management in April 2017 after being told she would not be hired due to a background check report that claimed she “had multiple felonies including a felony conviction for drug paraphernalia and for theft on her record.”

The Indianapolis Star reports that Petry claims that IDE Management – which also conducts business as Cathedral Health Care Centers – “denied her a job based on allegedly inaccurate results of a background check without giving her a proper chance to correct those results and thus violated required provisions of the Fair Credit Reporting Act, which governs background checks in the U.S.”

Petry submitted to a background check with IDE after applying for a position as a nurse in March 2017. After IDE decided not to hire her based on the background check report “obtained from an unknown consumer reporting agency,” she filed the lawsuit when the company refused her request for a copy of the report. The complete story from The Indianapolis Star is available here.

Enacted in 1970, the federal Fair Credit Reporting Act (FCRA) regulates the collection, dissemination, and use of consumer information in background check reports – officially called “consumer reports” – supplied by Consumer Reporting Agencies (CRAs). The FCRA is designed to ensure that information supplied by CRAs is as accurate as possible. The complete text of the FCRA is available here. 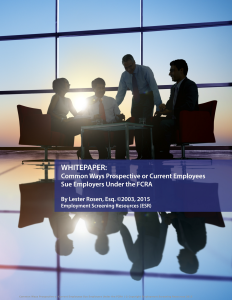