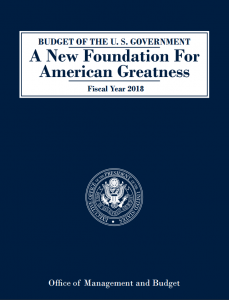 On May 23, 2017, the White House Office of Management and Budget (OMB) released its proposed BUDGET OF THE U. S. GOVERNMENT: A New Foundation For American Greatness for Fiscal Year (FY) 2018 that included in the Appendix of the proposed Department of Labor (DOL) budget a proposal to merge the Office of Federal Contract Compliance Programs (OFCCP) into the U.S. Equal Employment Opportunity Commission (EEOC) to create “one agency to combat employment discrimination.”

Page 749 of the Appendix for the proposed budget for the DOL – which oversees the OFCCP – went on to state: OFCCP and EEOC will work collaboratively to coordinate this transition to the EEOC by the end of FY 2018. This builds on the existing tradition of operational coordination between the two agencies. The transition of OFCCP and integration of these two agencies will reduce operational redundancies, promote efficiencies, improve services to citizens, and strengthen civil rights enforcement.

The EEOC is responsible for enforcing federal laws that make it illegal to discriminate against a job applicant or an employee because of the person’s race, color, religion, sex (including pregnancy, gender identity, and sexual orientation), national origin, age (40 or older), disability, or genetic information. The OFCCP enforces the contractual promise of affirmative action and equal employment opportunity required of those who do business with the Federal government. Specifically, the OFCCP administers:

The proposed $88 million budget for the OFCCP will enable the OFCCP to work collaboratively with the EEOC to develop and implement a plan to merge OFCCP into the EEOC by the end of FY 2018, combat pay discrimination through intensive contractor compliance assistance aimed at educating contractors about their contractual obligations, and focus on larger federal and federally-assisted construction projects that have the potential to employ large numbers of diverse workers.

On the same day the White House submitted its proposed budget for FY 2018 to Congress, a hearing took place before the House Subcommittee on Workplace Protections (Committee on Education and the Workforce) entitled “The Need for More Responsible Regulatory and Enforcement Policies at the EEOC” that specifically addressed the issue of the proposed merger of the EEOC and OFCCP. Both the employer community and civil rights activists seemed to be on the same side in opposing the merger.

When asked about the proposed merger by U.S. Representative Mark Takano (D-California), Ms. Camille A. Olson (Testimony) – Attorney at Seyfarth Shaw LLP and Chair of the U.S. Chamber of Commerce Equal Employment Opportunity (EEO) Subcommittee – and Mr. Todd A. Cox (Testimony) – Director of Policy of the National Association for the Advancement of Colored People (NAACP) Legal Defense and Education Fund – both opposed the merger since the EEOC and OFCCP have different  missions and approaches.

Ms. Olson observed that the mission of the EEOC is nondiscrimination while the mission of the OFCCP is affirmative action and expressed concern that a merger that mixed these two missions would be confusing. Mr. Cox was “very concerned that the missions of both agencies would be undermined” and noted that the EEOC responds to charges filed by employees while the OFCCP conducts audits before any claims or allegations of wrongdoing. Both the Chamber of Commerce and the NAACP are opposed to the merger.

Read More News Such as EEOC and OFCCP Merger at ESR