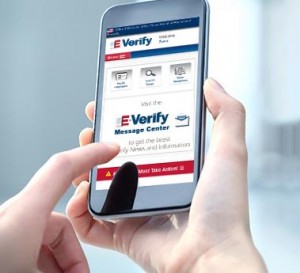 The White House Fiscal Year (FY) 2018 Budget that requests $44.1 billion for the Department of Homeland Security (DHS) also calls for “expanding worksite enforcement strategies by mandating nationwide use of the E-Verify system” to reduce illegal employment, according to the DHS FY 2018 Budget in Brief.

The DHS FY 2018 Budget in Brief requests: $131.5 million for E-Verify operations and upgrades for U.S. Citizenship and Immigration Services (USCIS), including new investments to expand the E-Verify program. The purpose of expanding E-Verify is to support mandatory use of E-Verify nationwide within three years.

E-Verify is an Internet-based system that compares information from the Form I-9, Employment Eligibility Verification of newly hired employees to data from DHS, the Social Security Administration (SSA), and State Department of Motor Vehicle (DMV) records to confirm employment eligibility.

The USCIS – the government agency overseeing lawful immigration to the United States – also saw the number of employee work authorization verification requests processed grow to more than 34 million in FY 2016. Modernization efforts to increase the effectiveness and efficiency of E-Verify included:

Part of the $131.5 million requested for E-Verify in the FY 2018 Budget includes an increase of $15.2 million E-Verify from FY 2017 to 2018 to support nationwide mandatory use of the E-Verify system. Here are highlights included in the DHS Budget in Brief at www.dhs.gov/publication/fy-2018-budget-brief/:

As reported earlier by ESR News, the White House released its FY 2018 Budget Blueprint in March 2017 that called for investing $15 million to begin implementation of mandatory nationwide use of the E-Verify program as part of the $44.1 billion net discretionary budget for the DHS.

Employment Screening Resources® (ESR) offices will be closed Monday, May 29, 2017, in observance of the Memorial Day holiday that honors American service members who died in combat. ESR offices will reopen on Tuesday, May 30, 2017. ESR salutes those who have given their lives in service for America.