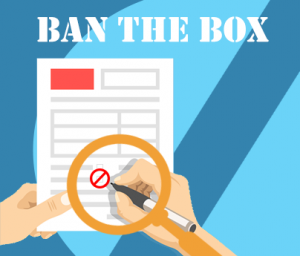 A study released in January of 2017 entitled “Ban the Box, Convictions, and Public Sector Employment” has found that Ban the Box policies that remove criminal history questions from applications and delay such inquiries until later in the hiring process increased the odds of public sector employment for those job applicants with criminal records by close to 40 percent. This study may be downloaded here.

The study of Ban the Box (BTB) policies was written by Terry-Ann Craigie, Ph.D, Assistant Professor of Economics at Connecticut College. The study revealed that: In general, the study finds that public sector BTB policies increase the probability of public sector employment of convicted individuals by approximately 5 percentage points, which constitutes nearly 40% of the outcome mean.

The study aimed to identify the national impact of public sector Ban the Box policies on the public sector employment of convicted individuals by using data from the National Longitudinal Survey of Youth 1997 cohort (NLSY97) that followed the lives of nearly 9,000 American youths born between 1980-84 who were ages 12 to 17 when first interviewed in 1997 and have been surveyed 16 times to date.

The study also examined the possibility of “statistical discrimination” resulting from employers who are unable to rely on conviction information due to Ban the Box policies using characteristics such as race, age, and gender to predict the conviction status of job applicants. Young minority males would be the most likely to be adversely affected when using such factors to determine the probability of conviction.

As the study noted: This strategy eliminates potentially qualified individuals who match these characteristics even if they have never been convicted; the demographic marked by employment instability – young low-skilled minority males – is most vulnerable to this kind of statistical discrimination because they disproportionately comprise the correctional population.

However, the study claimed that evidence of statistical discrimination “is largely representative of the employment practices in the private sector” while “the hiring guidelines for the public sector are vastly different from those in the private sector.” As a possible result of this difference, the study did not uncover any evidence of statistical discrimination against young low-skilled minority males.

Currently, more than 150 and cities and counties as well as 28 states representing nearly every region of the country have adopted some form of Ban the Box policies, according to the National Employment Law Project (NELP), which also estimates that 70 million people in the United States – or nearly 1 in 3 U.S. adults – have a prior arrest or conviction record.

Ban the Box does have some critics. A study issued in July 2016 – Does “Ban the Box” Help or Hurt Low-Skilled Workers? Statistical Discrimination and Employment Outcomes When Criminal Histories are Hidden – claimed Ban the Box policies decreased the probability of being employed by 5.1 percent for young, low-skilled African-American men, and by 2.9 percent for young, low-skilled Hispanic men.

The study by Jennifer L. Doleac and Benjamin Hansen found Ban the Box policies “decrease the probability of being employed by 3.4 percentage points for young, low-skilled black men, and by 2.3 percentage points for young, low-skilled Hispanic men.” These findings support the hypothesis that employers statistically discriminate against demographic groups likely to have a criminal record.

In August 2016 – to counter studies critical of Ban the Box – NELP released a policy brief entitled Racial Profiling in Hiring: A Critique of New “Ban the Box” Studies critical of studies that claim Ban the Box policies meant to help applicants with criminal records find work could do “more harm than good” by unintentionally harming minority job seekers. NELP believes these studies reach “the wrong conclusion.”

“The purpose of Ban the Box is to give those applicants with criminal pasts a fair shot at obtaining employment,” says Attorney Lester Rosen, founder and CEO of Employment Screening Resources® (ESR). “By removing the criminal history question, supporters claim job applicants can be sure that they will not be automatically excluded from consideration for a job because of their past mistakes.”

Rosen, author of The Safe Hiring Manual, adds: “Ban the Box does not mean there can never be a criminal background check but instead prevents an early knock-out punch before ex-offenders even have the opportunity to be considered on their individual merits.  A background check can be conducted and an employer can exercise due diligence, but this process is delayed until later in the hiring process.”