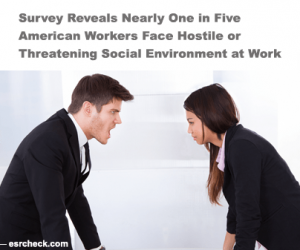 A “disturbingly high” number of American workers – nearly one in five – face a hostile or threatening social environment at work, according to the latest American Working Conditions Survey (AWCS) that revealed the American workplace can be “very physically and emotionally taxing” for many workers.

The survey of 3,066 adults by RAND Corporation, Harvard Medical School, and the University of California, Los Angeles (UCLA) found younger and prime-aged female workers were most likely to experience unwanted sexual attention while younger males were more likely to experience verbal abuse.

The workplace survey was fielded in 2015 on the RAND American Life Panel – a nationally representative sample of individuals residing in the U.S. – to collect detailed information across a broad range of working conditions in the American workplace. Key findings about American workers include:

On the positive side, more than one-half – 58 percent – of American workers described their boss as supportive, while 56 percent say that they have very good friends at work. Four out of five American workers reported that their job met at least one definition of “meaningful” always or most of the time.

“I was surprised how taxing the workplace appears to be, both for less-educated and for more-educated workers,” lead author of the report Nicole Maestas, an associate professor at Harvard Medical School and an adjunct economist at RAND, stated in a press release about the AWCS study.

Other authors of the study are Kathleen J. Mullen, David Powell, and Jeffrey B. Wenger of the RAND Corporation, and Till von Wachter of UCLA. The complete AWCS report is entitled “Working Conditions in the United States: A Report on the 2015 American Working Conditions Survey.”

Employment Screening Resources® (ESR) is a leading global background check provider located in the San Francisco Bay area. ESR News has several blogs about surveys on American workers and the American workplace that are available at www.esrcheck.com/wordpress/tag/survey/.