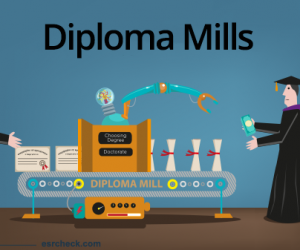 A Pakistani man who pled guilty to conspiracy to commit wire fraud was sentenced to 21 months in prison for his role in an international diploma mill scheme operated through a Pakistani company and ordered to forfeit $5,303,020 in addition to the prison term, according to a press release from the Acting United States Attorney for the Southern District of New York.

“Umair Hamid and Axact operated a massive diploma mill that preyed on consumers who thought their tuition would pay for a college education. Instead, Hamid provided victims with worthless fake diplomas. Defendants like Hamid who profit from fake schools face very real penalties, including prison time,” Acting U.S. Attorney Kim stated in the press release.

Hamid, who served as Axact’s Assistant Vice President of International Relations, helped the company conduct the fraud in the United States and other locations by serving as the primary contact during negotiations with a former competitor for Axact’s acquisition of diploma mill websites to deceive consumers into paying fees for non-existent educational programs.

Hamid and his co-conspirators deceived individuals in the United States and across the world into enrolling in diploma mill websites disguised as high schools, colleges, and universities.  Consumers paid upfront fees to be enrolled in real educational courses to receive legitimate degrees but instead received no instruction and worthless degrees from a diploma mill.

As reported by ESR News in December of 2016,  the U.S. Department of Justice (DOJ) announced the filing of a criminal complaint charging Hamid with wire fraud, conspiracy to commit wire fraud, and aggravated identity theft in connection with a worldwide diploma mill scheme that collected approximately $140 million from tens of thousands of consumers.

A report from Verifile Accredibase defined diploma mill providers as “mostly online entities that offer substandard or bogus degrees in exchange for payment and not much else.” These degrees are often only based on life experience and little work. The report also found that the United States held “the dubious title of most popular location for diploma mill providers.”

Diploma mill providers that sell worthless degrees without requiring academic achievement make an estimated $200 million annually, according to College Choice, an online publication dedicated to helping students find the right college. Warning signs of a diploma mill include no exams and instant degrees within 30 days of application in exchange for lump sums of money.

“A diploma mill creates a danger to employers since educational achievements tell a great deal about a job applicant’s ability, qualifications, and motivation,” explains Employment Screening Resources® (ESR) founder and CEO Attorney Lester Rosen, who wrote an article about education verifications to help employers avoid being tricked by a diploma mill scams.