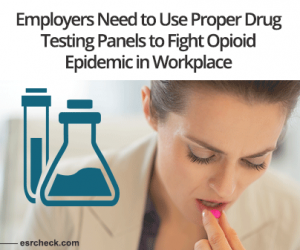 Even with the dramatic rise in the use of opioids – which can include the illegal drug heroin and legally prescribed pain relievers such as OxyContin® and Vicodin® – some employers hoping to avoid hiring opioid-addicted workers through drug testing may not know the best type of drug test panel to use to uncover opioid abuse, according to an article from Talent Economy.

Standerwick – who possesses extensive knowledge of background screening, drug testing, and occupational health testing – explained in the article that employers “need to recognize that there has been a surge in drug use, prescription drug use in particular,” and that often the drug testing panels they are using may not even test for the most commonly abused substances.

While employers commonly assume a 10-panel drug test will detect opioid abuse more than a five-panel drug test, Standerwick said the 10-panel tests for drugs such as Methaqualone (brand name Quaalude) which is no longer commercially manufactured in the United States.  She advised employers drug testing for synthetic opioids to ensure their drug test panel includes expanded opiates.

Since opioid abuse cost employers nationwide $16.3 billion in 2013 in disability claims and lowered productivity, Standerwick suggested that “business leaders should take proactive measures” with drug testing. Even if companies have a zero-tolerance policy, she explained that just having the education component as part of their program, educating employees, and taking a proactive stance is helpful.

The article also cited statistics from the Centers for Disease Control and Prevention (CDC) that showed opioid prescriptions have nearly quadrupled from 1999 to 2014 and prescription opioid overdose deaths increased similarly during this time period. The complete Talent Economy article is available at www.talenteconomy.io/2017/09/05/can-employers-fight-opioid-epidemic/.

The National Institute of Drug Abuse (NIDA) defines opioids as a class of drugs that includes the illegal drug heroin, synthetic opioids such as fentanyl, and legally prescribed pain relievers such as oxycodone (OxyContin®), hydrocodone (Vicodin®), codeine, morphine, and many others. To learn more about opioids, visit www.drugabuse.gov/drugs-abuse/opioids.

Statistics from the NIDA opioid crisis webpage reveal more than 90 Americans die of an opioid overdoes every day, more than 33,000 Americans died of an opioid overdose in 2015, and the total economic burden of prescription opioid misuse in the United States is $78.5 billion a year for healthcare costs, lost productivity, addiction treatment, and criminal justice involvement.