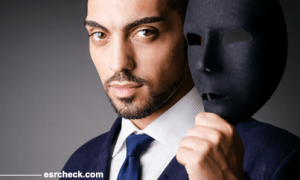 A former partner at the notorious brokerage house Stratton Oakmont that was profiled – some might even say glorified – in the 2013 film “The Wolf of Wall Street” who ended up serving 22 months of jail time for securities fraud is now the founder and CEO of a for-profit job placement company called 70MillionJobs.com that connects ex-offenders like him with criminal records to job opportunities.

“Having lived with hundreds of men in prison, I observed that as people they were no better or worse than those I knew on the outside,” Richard Bronson – who believes there are 70 million Americans with a criminal record – told Forbes magazine in an article posted on the 70 Million Jobs Blog. “So should they, or indeed anyone, be forced to serve a life sentence for a crime committed, often in their youth?”

Employers visiting 70MillionJobs.com can post job openings or search through a resume database of ex-offenders looking for work. They can hide their company name or location if desired, add screening questions to postings, contact candidates with links to existing jobs, and use applicant tracking features that include messaging applicants, adding notes to applicants, and forwarding applicants to other staff.

“Employers often have a negative bias to hiring applicants with criminal records. It’s certainly understandable,” Bronson said. “But there are new studies that suggest that ex-offenders can actually be better employees than those without records. It makes sense: they’re used to following directions, they’re truly appreciative for an opportunity, and they’re extremely careful not to mess up on the job.”

70MillionJobs.com also helps ex-offenders create a job seeker account and post a resume as well as search for jobs on the website, which explains there is a 75 percent chance that someone released from prison will return within five years and nearly all will be unemployed when re-arrested. To learn more about this job placement service for ex-offenders – including pricing – visit www.70MillionJobs.com.

“Our applicants have, on average, little experience negotiating the path to traditional employment. Their resumes are often tragically barren of ‘legitimate’ experience,” Bronson said. “So we’re creating a platform for them to create video resumes, which will humanize them beyond a line on an arrest report, and show employers that these folks can be charming, smart, personable and potentially a real asset.”

As reported by ESR News, a study released by the National Employment Law Project (NELP) in 2011 entitled “65 Million Need Not Apply” estimated that approximately 64.6 million ex-offenders in the United States – more than one in four American adults – with a criminal record. NELP, a nonprofit organization supporting low-wage workers and the unemployed, has since revised that number to 70 million people.

Currently, 29 states and more than 150 cities and counties have “Ban the Box” laws that remove the criminal history question from applications that applicants are asked to check if they have criminal records and delay such questions until later on in the hiring process so ex-offenders are given a chance to show their knowledge, skills, and abilities to perform the job in question, according to NELP. 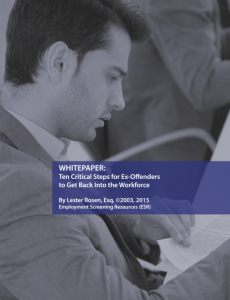 Employment Screening Resources® (ESR) has released a complimentary whitepaper written by ESR founder and CEO entitled “Ten Critical Steps for Ex-Offenders to Get Back into the Workforce” to help job applicants with criminal records reenter the workplace. This complimentary whitepaper is available at www.esrcheck.com/Whitepapers/Ten-Steps-for-Ex-Offenders-to-Get-Back-in-Workforce/.

As Rosen explains in the whitepaper: “The bottom line is that many ex-offenders seeking to rebuild their lives and get back into the mainstream face significant challenges… However, challenging is not the same as impossible. The key is the right attitude and getting and keeping that first job, so that as time goes by a person has developed a successful job history that outweighs past problems.”