Suspect in Shootings at Maryland Business had History of Workplace Violence 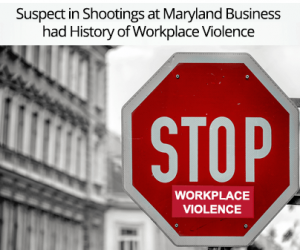 The man suspected of killing three of his co-workers and wounding two others at a business in Maryland on October 18, 2017, and then driving to Delaware to shoot a sixth person on the same day, had a history of workplace violence and a long criminal record, according to a report from The Baltimore Sun.

The Baltimore Sun reports that the suspect, Radee L. Prince, 37, who has addresses in both Maryland and Delaware, “was known to law enforcement officials. And he had been fired from another job earlier this year after allegedly striking one co-worker and threatening others, according to court records.”

The Baltimore Sun reports that Prince – who opened fire in the morning at a granite countertop maker in Edgewood, Maryland and was later taken into custody by law enforcement agencies on the same day of the shootings – had a total of 42 arrests in Delaware that included 15 felony convictions.

In February of 2017, “Prince allegedly punched a co-worker in the face at a Pulaski Highway granite and marble shop where he worked, then returned multiple times to threaten others after being fired for the attack, according to one co-worker who sought a peace order” against him, The Baltimore Sun reports.

The co-worker detailed the workplace violence in the application for the peace order – Maryland’s version of a restraining order – and wrote “Prince came back to the business three times after he was fired.” A fourth time, Prince allegedly “came to see me, cursed, and yelled at me,” the employee wrote.

The Baltimore Sun reports the co-worker said Prince did not touch him physically, but wrote “I do not want to wait until he will, plus, he already punched a co-worker. He can also do it to me.” A district judge denied the peace order because the co-worker “could not meet the required burden of proof.”

The Occupational Safety and Health Administration (OSHA) – a federal agency that works to assure safe and healthful working conditions – defines workplace violence as “any act or threat of physical violence, harassment, intimidation, or other threatening disruptive behavior that occurs at the work site.”

Workplace violence ranges from threats and verbal abuse to physical assaults and even homicide, and can affect and involve employees, clients, customers, and visitors. Nearly two million American workers are victims of workplace violence each year and many more cases go unreported, according to OSHA.

The Bureau of Labor Statistics Census of Fatal Occupational Injuries (CFOI) revealed that of the 4,679 fatal workplace injuries that occurred in the United States in 2014, 403 were workplace homicides. However manifested, workplace violence is a major concern for employers and employees nationwide.