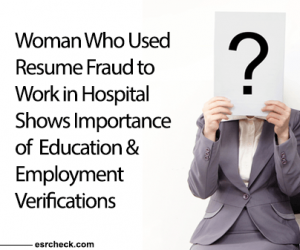 A woman who admitted in court that she lied about her credentials and experience on her resume to work as a nurse at a St. Louis, Missouri hospital for months and teach nursing at a New Mexico college shows the importance of education and employment verifications when background screening job applicants.

The St. Louis Post-Dispatch reports that Samantha Rivera, 36, pleaded guilty to health care fraud and identity theft in U.S. District Court in St. Louis after she “used the name and license number of a New Mexico nurse with a similar name to apply for a job with a St. Louis area staffing agency.”

Rivera – who could face 10 to 16 months in federal prison – claimed on her resume “to have worked in a New Mexico hospital and to have graduated with a bachelor’s degree in nursing” and was placed in a hospital where she worked as a nurse in the intensive care unit and a psych ward, the Post-Dispatch reports.

Her resume fraud was discovered when she applied for a job with a Chicago staffing agency and made the same false claims about her education and employment history and “an investigation by agency employees showed that her nursing license and her resume were fraudulent,” the Post-Dispatch reports.

Nursing board records show Rivera was hired in 2015 to teach at a college in Albuquerque, New Mexico “despite a background check that could not verify her education and employment,” the Post-Dispatch reports, adding that the school failed to notify the nursing board Rivera was pretending to be a nurse.

In September 2017, ESR News reported that a benchmark study on employment background screening revealed that more than eight out of ten employers – a whopping 85 percent – found resume fraud that included covered up employment gaps, fake references, and embellished responsibilities.

“Not checking the past employment of potential new hires is one of the biggest mistakes employers can make,” says Attorney Lester Rosen, founder and CEO of global background check firm Employment Screening Resources® (ESR), and author of ‘The Safe Hiring Manual,’ a guide to background screening.

Rosen spoke about resume fraud during a session on verifications at the Society for Human Resource Management (SHRM) 2017 Talent Management Conference & Exposition in Chicago in April 2017. He said employers have a vested interest in finding out how successful applicants were in previous jobs.

Rosen told SHRM members that “many human resources professionals believe that how a person has performed in the past is the single best indicator of how they will perform for you at your business” and that employers need “to try to obtain as much information as possible about past performance.”

Rosen described a resume as “essentially a marketing tool for an applicant” and said employers need to be concerned when “chest-puffing crosses the line into fabrication” since applicants who use lies and fabrications to get hired may continue with the same type of dishonesty once they have the job.