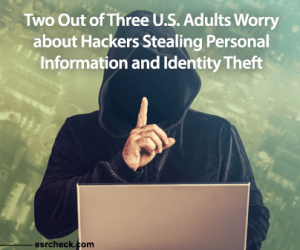 Cybercrimes are new additions to the list of crimes for the Gallup Annual Crime Poll. U.S. adults have been asked about identity theft since 2009, and the percentage of Americans who worry frequently or occasionally about being a victim of identity theft has hovered between 66 percent and 70 percent.

The Gallup Annual Crime Poll was conducted October 5 to 11, 2017, on a random sample of 1,028 adults aged 18 and older living in all 50 U.S. states and the District of Columbia. More information about the Gallup Poll is at http://news.gallup.com/poll/221270/cybercrime-tops-americans-crime-worries.aspx.

The consistently high anxiety Americans feel about cybercrimes such as hackers stealing personal data and identity theft may be attributed to the steady stream of reports about large-scale high-profile data breach incidents. ESR News has reported on many data breach incidents over the past few years.

In September 2017, ESR News reported that nationwide credit reporting agency Equifax disclosed it had suffered a massive data breach that compromised the personal data of approximately 143 million Americans — almost half the country – a number later increased by 2.5 million to total 145.5 million.

In May 31 2017, ESR News reported that national retailer Target, Inc. agreed to pay a record $18.5 million multi-state settlement in response to allegations that more than 40 million customers had their payment card information compromised from a data breach during the 2013 holiday season.