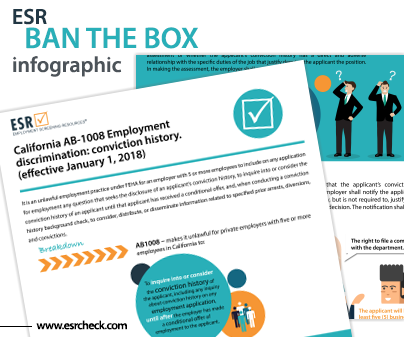 Employment Screening Resources® (ESR) – a global background check firm located in the San Francisco area – has created a California Ban the Box Law Infographic to help employers understand Assembly Bill 1008, a law prohibiting private employers from asking about the criminal history of applicants before a conditional job offer that takes effect January 1, 2018. To access the infographic, complete this form.

California Governor Jerry Brown signed AB 1008 in October 2017 and the law applies to employers in the state with five or more employees. In 2013, California passed Ban the Box legislation – AB 218 – which applied to public jobs. The “Ban the Box” law removes the box on job applications applicants are asked to check if they have a criminal record and delays such inquiries until later in the hiring process.

“Originally, Ban the Box laws were concerned with the initial the application process. However, many of these laws, such as the new California law, have morphed into ‘Fair Chance’ laws that also impose processes for how criminal information is utilized.  In other words, it is often no longer limited to just the application process,” says ESR founder and CEO Attorney Lester Rosen, author of ‘The Safe Hiring Manual.’

The California Ban the Box Law Infographic helps employers understand what practices with criminal records are considered unlawful under AB 1008 and teaches them how to perform an “Individualized Assessment” to consider the nature and gravity of the offense or conduct, the time that has passed since the offense or conduct and completion of the sentence, and the nature of the job held or sought.

The infographic also covers exemptions where AB 1008 does not apply, potential issues with overlapping city and county Ban the Box laws – such as those in Los Angeles and San Francisco – not giving a clear state-wide solution, and tips for employers on updating applications and training hiring managers. The infographic is available by completing a form at http://www2.esrcheck.com/l/67412/2017-12-04/b8fxt7.

Rosen says another critical aspect for California employers is that AB 1008 does not preempt local Ban the Box laws, so employers need to pay attention to Ban the Box laws in Los Angeles and San Francisco that can differ along with the statewide law. To make matters more complicated, California did not give employers any incentives to hire ex-offenders by providing protection from lawsuits for negligent hiring.

“Local governments in Los Angeles and San Francisco cannot legally give employers protection if they hire ex-offenders and the California legislature chose not to promote and encourage hiring ex-offenders by adding some degree of protection from lawsuits,” says Rosen, who adds that some question if Ban the Box laws will have the unintentional consequence of making it more difficult for ex-offenders to find jobs.

Currently, 30 states and more than 150 cities and counties have Ban the Box laws that remove the criminal history question from applications, according to the National Employment Law Project (NELP). A study released by the NELP in 2011 estimated that approximately 65 million people in the United States have criminal records – more than one in four American adults – showing the need for Ban the Box laws.

Employers will need to work with a background screening firm that can guide them through the myriad of various Ban the Box laws in America. Employment Screening Resources® (ESR) – a background screening firm accredited by the National Association of Professional Background Screeners (NAPBS®) – offers employers news, resources, and updates about Ban the Box at www.esrcheck.com/Ban-the-Box/.