Rising Demand for Workers in U.S. Leads to More Job Opportunities for Applicants with Criminal Records 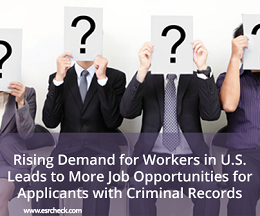 With the demand for workers rising in the United States – the December 2017 jobs report revealed the unemployment rate to be 4.1 percent – companies in America are being forced “to consider workers they once would have turned away” and to provide “opportunities to people who have long faced barriers to employment, such as criminal records,” according to a report from The New York Times.

The Times reports in one Wisconsin county – where the unemployment rate was 2 percent in November 2017 – “demand for workers has grown so intense that manufacturers are taking their recruiting a step further: hiring inmates at full wages to work in factories even while they serve their prison sentences.” Other states with similar inmate programs saw demand for their workers rise sharply in the past year.

U.S. Census Bureau data of monthly percentage-point changes in employment rates from 2012 to 2017 reveals that the employment rates of “prime-age workers” aged 25 to 54 have grown the most among those who have not earned a high school diploma in the past five years, more than people with a high school diploma or G.E.D., some college or associate’s degree, or a Bachelor’s degree or higher.

An estimated 70 million people in the United States – nearly one in three adults – have a prior arrest or conviction record, according to the National Employment Law Project (NELP). More than 150 cities and counties and 30 states have “Ban the Box” laws that remove questions about criminal history from job applications to give qualified ex-offenders a fair chance to show their knowledge, skills, and abilities.

The U.S. Equal Employment Opportunity Commission (EEOC) – the agency enforcing laws prohibiting employment discrimination – recommended that “employers not ask about convictions on job applications and that, if and when they make such inquiries, the inquiries be limited to convictions for which exclusion would be job-related for the position in question and consistent with business necessity.”

Employment Screening Resources® (ESR) is not a typical screening firm and does not intend to become one. ESR offers a whitepaper entitled “Ten Critical Steps for Ex-Offenders to Get Back into the Workforce” to help job applicants with criminal records overcome the difficult, but not impossible, challenges of finding employment. The complimentary whitepaper from ESR is available here.