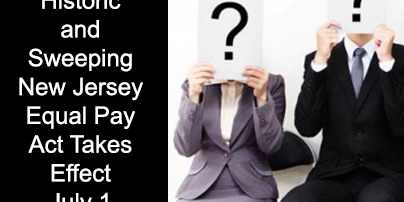 On April 24, 2018, New Jersey Governor Phil Murphy signed into law the most “historic” and  ”sweeping” equal pay legislation in America – “The Diane B. Allen Equal Pay Act” – to fight gender inequity and support equal pay for women in the state, according to a press release on the Governor’s website.

The Equal Pay Act – which will take effect on July 1, 2018 – is named after former State Senator Diane Allen who herself was a victim of bias and strengthens protections against employment discrimination and promotes equal pay for all groups protected by New Jersey’s Law Against Discrimination (LAD).

“Today, we are sending a beacon far and wide to women across the Garden State and in America – the only factors to determine a worker’s wages should be intelligence, experience and capacity to do the job.  Pay equity will help us in building a stronger, fairer New Jersey.” Governor Murphy said.

The legislation amends the LAD to prohibit employers from discriminating against employees who are members of a protected class and paying compensation rates less than rates paid to employees not in a protected class for substantially similar work when viewed as a composite skill, effort, and responsibility.

The bill prohibits employers from taking reprisals against employees for discussing pay with others and provides three-times the monetary damages for a violation. The aggrieved employee may obtain relief for up to six years of back pay and courts can award treble damages for violations of the equal pay law.

A Fact Sheet from the National Women’s Law Center found that a 20-year old woman beginning a full-time year-round position may lose $418,800 over a 40-year career in comparison to her male colleague and would have to work 10 more years until age 70 to close this lifetime wage gap with male colleagues.

On April 9, 2018 – one day before Equal Pay Day on April 10 – the 9th U.S. Circuit Court of Appeals ruled that employers cannot pay women less than men for the same work based on their salary history in order to “capitalize on the persistence of the wage gap,” according to a report from the Fresno Bee.

The opinion in the case of Aileen Rizo, 43 – who sued the Fresno County Office of Education after discovering her salary was less than a male co-worker who had the same job title but less education and experience – “could impact how women are paid in California and beyond,” The Fresno Bee reported.

The decision overturned a 2017 ruling where the 9th Circuit Court agreed that using salary history when calculating a new salary is allowed under The Equal Pay Act of 1963, a federal law that prohibits sex-based wage discrimination between men and women in the same workplace who perform equal jobs.

In 2015, women earned 80 percent of what men earned, according to the U.S. Census Bureau. The gender wage gap has narrowed by less than one-half a penny per year in the United States since 1963, when Congress passed the Equal Pay Act, according to the National Committee on Pay Equity.

States and cities have passed laws prohibiting employers from seeking salary history as part of a growing equal pay movement to narrow the gender wage gap between women and men. This is one of the “ESR Top Ten Background Check Trends” for 2018 selected by Employment Screening Resources (ESR).

“When employers have a background screening firm perform past employment verifications, it is critical that the screening firm have the knowledge about states and cities that prohibit salary history questions and software that helps facilities compliance,” explained ESR founder and CEO Attorney Lester Rosen.

ESR won the 2018 TekTonic Award from HRO Today Magazine that recognizes innovation and disruption in the world of HR and recruiting technology for its ESR Assured Compliance® that automatically updates all notices, disclosures, and other compliance processes when state or federal requirements change.