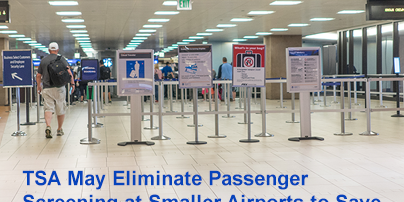 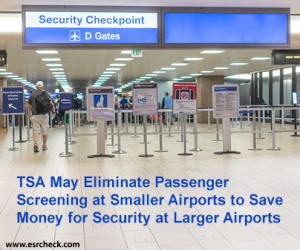 The Transportation Security Administration (TSA) may eliminate the screening of airline passengers at more than 150 smaller sized airports across the United States in order to save money that could be used to tighten security at larger airports, according to an exclusive report from CNN (Cable News Network).

CNN reports a TSA proposal to eliminate passenger screening at airports serving aircraft with 60 seats or fewer could save $115 million annually and would be the first major change for air travel in the U.S. after nearly two decades of TSA presence at airports since the terrorist attacks of September 11, 2001.

Under the TSA proposal, passengers and luggage arriving from smaller airports would undergo screening after arriving at major airports for connecting flights instead of joining the already screened population since larger airports have greater capacities and more advanced security measures than smaller airports.

CNN reports the TSA proposal would affect approximately 10,000 passengers screened by nearly 1,300 TSA employees daily, which constitutes roughly 0.5 percent of the people who fly out of U.S. airports on any given day. The TSA currently screens passengers at 440 airports, according to its website.

While the TSA proposal to stop screening passengers at smaller sized airports could bring a “small (non-zero) undesirable increase in risk related to additional adversary opportunity,” CNN terrorism analyst Paul Cruickshank said it was “stunning that this is even seriously being considered,” CNN reports.

“Al Qaeda and ISIS still regard aviation as a priority target,” Cruickshank told CNN. “If you have an aircraft of 50 or so people being blown out of the sky there is going to be a great amount of panic and there will indeed be significant economic reverberations, and of course significant loss of life.”

On August 3, 2018, the TSA responded to media reports on the budget proposal by saying that “reports of proposed TSA budget numbers are part of pre-decisional budget deliberations that are commonplace across federal agencies. No decisions have been made. Any assertions to the contrary simply aren’t true.”

The August 3 statement also explained that the “TSA’s top priority is to protect the nation’s transportation system. When securing the homeland, managing operations, assessing risks, measuring security effectiveness, and analyzing efficiencies is a routine and critical part of the process.”