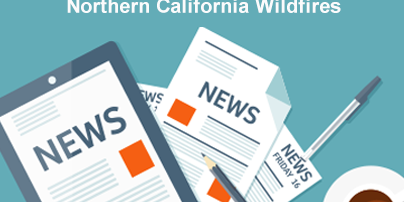 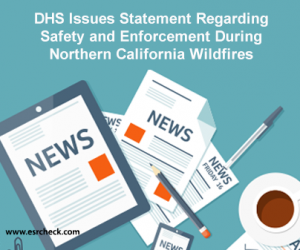 The U.S. Department of Homeland Security (DHS) – whose mission is to secure the nation from any threats and keep America safe – has issued a statement regarding safety and enforcement operations while devasting wildfires burn in northern California, including one record-breaking fire that is nine times the size of San Francisco and has scorched more than 290,000 acres to become the largest fire in state history.

The DHS statement regarding safety and enforcement during northern California wildfires reads: “U.S. Immigration and Customs Enforcement (ICE) is deeply concerned by the devastation wildfires have caused in significant portions of northern California. Our thoughts remain with those impacted by this tragedy, while our highest priority remains the preservation of life and safety wherever possible.

In consideration of these distressing circumstances, ICE will continue to suspend routine immigration enforcement operations in the areas affected by the fires in northern California, except in the event of a serious criminal presenting a public safety threat. Likewise, immigration enforcement will not be conducted at evacuation sites, or assistance centers such as shelters or food banks.”

ICE – a federal agency under the jurisdiction of the DHS – enforces federal laws governing border control, customs, trade, and immigration to promote homeland security and public safety. In February 2018, deportation officers from ICE arrested more than 150 individuals who were allegedly in violation of federal immigration laws during targeted enforcement operations in the northern California area.

On August 4, 2018, U.S. President Donald J. Trump declared that a major disaster exists in California and ordered Federal assistance to supplement recovery efforts in the areas affected by wildfires that began in late July. Residents and business owners who sustained losses in the designated counties can apply for assistance by calling 1-800-621-FEMA(3362) or by visiting www.DisasterAssistance.gov.

Wildfires raging in California have caused the deaths of several firefighters and residents. The record-breaking Mendocino Complex Fire – which consists of the Ranch Fire and River Fire – has burned more than 290,000 acres in Colusa, Lake, and Mendocino counties. The Carr Fire further north in Shasta County and Trinity County has burned over 170,000 acres. The Ferguson Fire has closed Yosemite National Park indefinitely.

How to Help Victims of Northern California Wildfires

As a company headquartered north of San Francisco, the hearts and thoughts of Employment Screening Resources (ESR) go out to people affected by the wildfires in northern California. Individuals wanting to help victims of the northern California wildfires can find information about donating and/or volunteering from the Red Cross, The Salvation Army, and verified GoFundMe campaigns, among other resources.