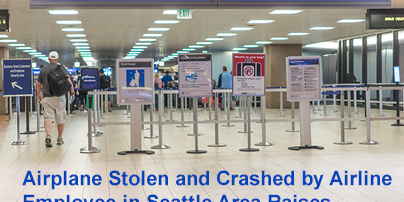 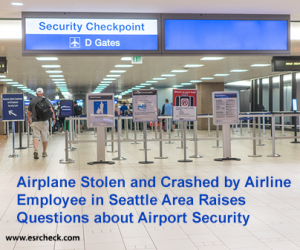 On August 10, 2018, an airline employee stole an empty passenger airplane at Seattle-Tacoma International Airport, flew erratically for close to an hour while being followed by armed military jets, and then died after intentionally crashing the plane on an island in Puget Sound, a bizarre incident that has raised questions about “the vulnerability of airport security,” according to a report from CNN (Cable News Network).

CNN reports that 29-year-old Richard Russell – who worked as a Horizon Air ground service agent for 3 1/2 years – used a pushback tractor to move an empty 76-seat Horizon Air turboprop plane parked in a maintenance area and took off without authorization at 7:32 p.m. During his flight, which included aerobatic maneuvers as he was pursued by two F-15 jets, Russell told air traffic controllers his “intent was not to harm anyone.”

CNN reports Russell’s job included directing aircraft for takeoff and gate approach, handling baggage, and tidying and de-icing planes. Officials do not believe he possessed a pilot’s license and do not know how he knew to fly a plane. While the crash on sparsely populated Ketron Island only killed Russell, “the brazen stealing of a commercial airline from a major U.S. airport has exposed a gap in airline security.”

CNN reports while investigators try to retrieve the flight data recorder and cockpit voice recorder of the plane, and the incident was not considered terror-related, experts said the crash exposed alarming gaps in airport security and would lead to a major review of industry security measures. “This is going to be a major learning event for the industry,” said CNN aviation analyst Justin Green. “This is a really big deal.”

Russell was in uniform, had credentials, and clearance to be in secure areas, according to Brad Tilden, CEO of Alaska Airlines, which owns Horizon Air. “They’re credential employees. They’re there to work on the airplanes… This is aviation in America. The doors of the airplanes are not keyed like a car. There is not an ignition key like a car. The setup in aviation in America is we secure the airfield,” Tilden told CNN.

In February 2017, an investigation into airport security in America led the House Homeland Security Committee Majority Staff to issue a report that examined employee screening at the approximately 450 airports in the U.S. under federal control. The report found that “much more needs to be done to improve the state of access controls and mitigate the insider threat facing America’s aviation sector.”

In August 2018, the Transportation Security Administration (TSA) – an agency of the U.S. Department of Homeland Security (DHS) that was created as a response to the September 11 attacks – considered eliminating the screening of airline passengers at more than 150 smaller airports in the United States in order to save money that could be used to tighten security at larger airports, according to reports.

The TSA issued a second statement that responded to media reports on the budget proposal that said the “TSA’s top priority is to protect the nation’s transportation system” and that “reports of proposed TSA budget numbers are part of pre-decisional budget deliberations that are commonplace across federal agencies. No decisions have been made. Any assertions to the contrary simply aren’t true.”

Employment Screening Resources® (ESR) – a leading global background check firm – offers screening services for employers specializing in the aviation, trucking, automotive, and transportation industries to help them be confident about employee drivers and fliers and ensure the safety of the public. To learn more, visit www.esrcheck.com/Background-Checks/Industry-Specific-Solutions/Transportation/.