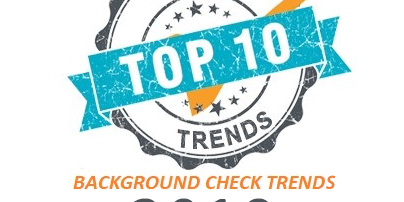 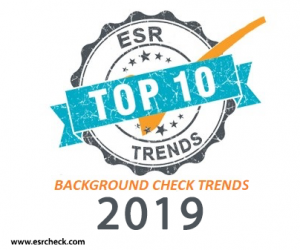 Reports about “gig economy” employers using cheap and instant background checks will lead those employers to examine the value of these background checks due to the examples of theft and violence experienced in 2019. This trend has been chosen by global background check provider Employment Screening Resources® (ESR) as sixth on the list of “ESR Top Ten Background Check Trends” for 2019.

The “gig economy” focuses on temporary work – or “gigs” – for the extended workforce and created income for 2.1 million people in the U.S. between 2010 and 2014, according to a 2015 American Action Forum Report. Examples of gig economy employers include transportation network companies (TNCs) such as Uber and Lyft as well as firms providing on demand cleaning, food delivery, and other services.

Essential to the success of any gig economy company is that consumers have trust that the services the company provides are safe to use. Unlike traditional employment where there is a greater degree of supervision, gig economy employment involves workers proving services in situations that are mostly unsupervised and can potentially cause greater risk to users.

The gig economy is rapidly growing. A study by Intuit found an estimated 7.6 million Americans will be regularly working as providers in the on-demand or “gig” economy by 2020, more than doubling the total of 3.2 million in 2015. The study found the gig economy workers have grown from 17 percent of the U.S. workforce in 1990, to 36 percent in 2015, and is expected to reach 43 percent by 2020.

However, with the growing gig economy comes a growing problem with background checks. In April 2018, a CNN investigation found at least 103 drivers working for Uber in the United States “have been accused of sexually assaulting or abusing their passengers in the past four years” and as many as “31 drivers have been convicted for crimes ranging from forcible touching and false imprisonment to rape.”

The CNN investigation of Uber – which was launched in San Francisco in 2010, operates in 630 cities worldwide, and provides 15 million rides a day – found there “is no publicly available data for the number of sexual assaults by Uber drivers or for drivers of other rideshare companies.” An investigation of Lyft found 18 cases of drivers being accused in the past four years with four convictions.

In April 2018, Uber said it would increase due diligence to strengthen its background checks. In a blog titled ‘Getting serious about safety,’ Uber Chief Executive Officer (CEO) Dara Khosrowshahi wrote that Uber has “conducted criminal and driving record screenings on millions of people” since the company started nearly nine years ago and will strengthen its driver screening with annual background checks.

In June 2018, further investigation by CNN revealed that criminal background checks performed by Uber and Lyft approved thousands of people who should have been disqualified because of criminal records. The CNN investigation into Uber found that there were several occasions when the company welcomed drivers who should have been barred under the company’s background check policy.

In July, Uber began performing continuous background checks on some of its drivers in the United States in an effort to improve safety for its riders following the CNN investigations. “Ultimately what we’re looking for… is a way to get the same kind of info as in a background check, but get it in a real-time manner,” Uber Vice President of Safety and Insurance Gus Fuldner told new media company Axios.

Uber’s policy excludes drivers with convictions of serious crimes or major driving offenses. Drivers who passed Uber background checks included a man convicted of attempted murder and accused of raping a passenger in Missouri, a murderer on parole in Texas, and an undocumented immigrant on trial for sexually assaulting three passengers in California, CNN reported. All no longer drive for Uber.

In August 2018, Mayor Rahm Emanuel announced the City of Chicago was preventing neighborhood violence by investing $10.4 million in youth mentoring programs coming from legal settlements with Uber, Lyft, and Via over allegations they performed background checks that were not consistent with standards set by the City’s rideshare ordinance, according to a press release on the Governor’s website.

Gig economy workers should be subjected to background checks, although the process may require a different approach than what is used in the full-time economy. Because of the potential liability faced with the extended workforce, gig economy employers should look for background screening providers that deliver “real” background checks and not cheap and instant “check the box” database searches.

There are several challenges gig economy employers will face in the coming years. First, there is no standardization as to what constitutes a background check and no agreed upon or generally accepted protocol as to what searches, depth, or methodology should be applied. A background check can range from an almost meaningless database search to a more robust check that includes county searches.

How background checks are conducted for gig workers is also critical. Screening firms can take shortcuts that undermine the value and completeness of the background check that would not be apparent to consumers or gig employers. Until there is some agreement on standards of how gig economy workers are checked, gig employers will continue to have a challenge in winning the trust of potential customers.

Another problem is the proliferation of so-called “instant” background checks. According to ESR founder and Chief Executive Officer (CEO) Attorney Lester Rosen, “instant” and “background check” don’t belong together in the same sentence. Another problem is the widespread reliance on databases or electronic screen scraping of data from courthouses that are not the functional equivalent of a real search.

Such approaches can carry the possibility of finding both “false negatives” and “false positives” in a search. A false negative means a person has a criminal record that is missed but should be considered, while a false positive means a person was either misidentified as having a criminal record when they do not or is based on an offense that has been set aside and should not be reported.

Still another issue is the reliance on so-called “continuous screening” where a gig economy firm tries to assure the public there are ongoing background checks to monitor gig workers for future criminal records. However, continuous screening can create a false sense of security since they are often based on database searches that have a large potential for errors and very limited worth in some states.

Employment Screening Resources® (ESR) also offers gig economy employers screening solutions for the on demand and extended workforce for workers who fall outside the traditional employer-employee situations but nevertheless expose their employers to the same risk as full-time employees. To learn more, visit www.esrcheck.com/Background-Checks/Industry-Specific-Solutions/On-Demand/.