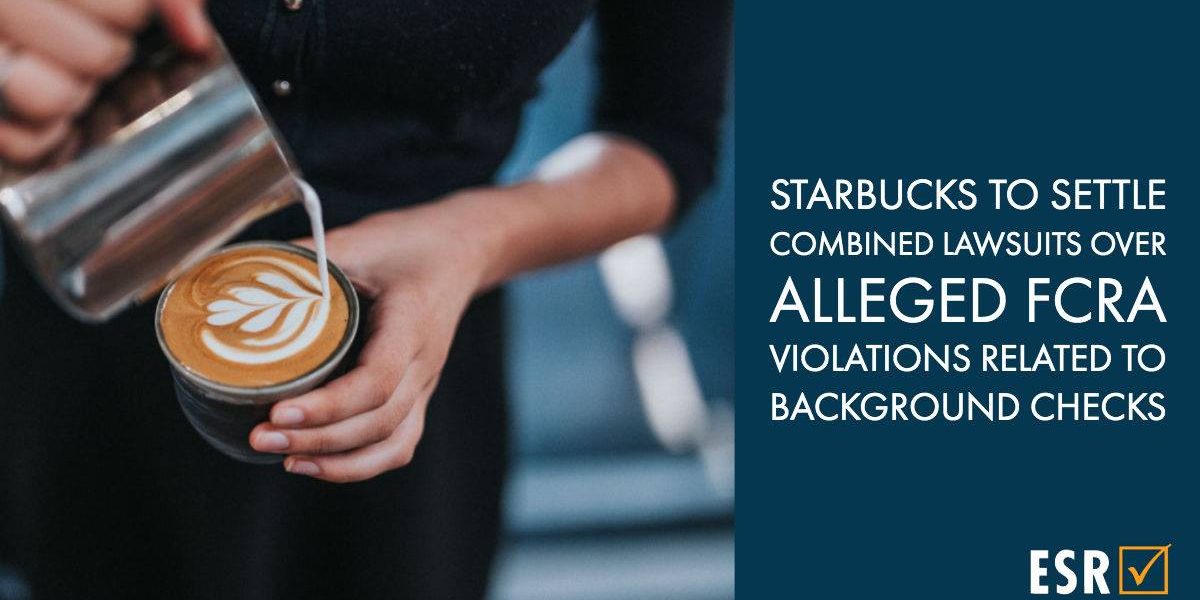 Two pending class action lawsuits filed against Starbucks Corporation – one filed in Washington state in 2016 and the other filed in Georgia in 2017 – over alleged violations of the federal Fair Credit Reporting Act (FCRA) made during the background checks of job applicants will be combined “in preparation for a settlement,” according to a report on the Yahoo! Finance website.

The lawsuits claim the popular Seattle, Washington-based coffeehouse chain violated the FCRA by allegedly failing to provide job applicants with pre-adverse action notification, including a copy of their background check report, a summary of their rights under the FCRA, and a meaningful opportunity to correct any errors before denying them employment based upon criminal records that proved to be erroneous.

In the first class action lawsuit filed in the U.S. District Court for the Western District of Washington, lead plaintiff Jonathan Rosario claimed he was turned down for a job at Starbucks when a background check revealed crimes committed by his adoptive brother due to identity theft. Although he had a corrected report sent to Starbucks, the company “never ‘reversed’ its adverse action,” Yahoo! Finance reports.

Rosario’s complaint alleged that he never received a pre-adverse action notice, a copy of his background check report, or a summary of his rights under the FCRA when he was denied employment by Starbucks. In addition, he had no meaningful opportunity to dispute the denial of employment by Starbucks prior to the final decision being made, which is also required under the FCRA.

In the second class action lawsuit filed in the U.S. District Court for the Northern District of Georgia, lead plaintiff Kevin Wills claimed he lost his job at Starbucks when a background check included convictions for a Minnesota man named Kevin Willis. Although Wills had a different last name and never lived in Minnesota, the crimes “barred him from working for Starbucks,” Yahoo! Finance reports.

Wills’ complaint claimed that “Starbucks typically does not provide job applicants with a copy of their consumer reports before it takes adverse action against them based on the information in such reports” and sought to certify anyone “to whom Starbucks did not provide a copy of the consumer report and a written description of rights” at least five days before adverse action was taken as required by the FCRA.

Both FCRA class action lawsuits involving Rosario and Wills sought to certify similarly situated job applicants who had an adverse action taken against them “based in whole or in part” on background check reports used for employment purposes by Starbucks, which employs an estimated 186,000 people across the United States and hires roughly 109,000 people every year, Yahoo! Finance reports.

In April 2019, Washington District Court Judge Richard Jones ordered the cases consolidated in Georgia before Judge Charles Pannell “for the purpose of settling both class actions and directing notice to a single nationwide class.” The order stated both cases “involve identical claims, and the classes of job applicants in each case are congruent and encompass nearly 8,100 individuals,” Yahoo! Finance reports.

Enacted by Congress in 1970, the FCRA 15 U.S.C. § 1681 is U.S. Federal Government legislation that promotes the accuracy, fairness, and privacy of consumer information contained in the files of consumer reporting agencies (CRAs) – the FCRA’s term for background check firms – and also protects consumers from the willful and/or negligent inclusion of inaccurate information in background check reports.

Under the FCRA, if an employer relies upon a background check report “in whole or in part” to deny employment, an applicant is entitled to a pre-adverse action process that includes receiving a copy of the report, a summary of FCRA rights, and a meaningful opportunity to dispute any information the applicant contends is inaccurate or incomplete. If the employer makes the decision final, the FCRA requires a second post-adverse action notice.

“There has been a significant spike in class action lawsuits under the FCRA and the allegations are almost always based on violations by failing to follow the basic FCRA 101 rules. Most FCRA lawsuits can be avoided by a rudimentary review of the forms and processes used by employers. Generally, the law is so clear that there is really no good reason for an employer to be sued under the FCRA,” Rosen explained.

“A class action lawsuit under the FCRA demonstrates that background screening is much more than just supplying dates. The emphasis is now on legal compliance. Although a background screening firm cannot give legal advice, it should be able to supply industry standard educational information about processes and procedures for FCRA compliance that employers and their attorneys can find useful,” added Rosen.

The upward trend of FCRA lawsuits can underscore a deficient relationship between employers and their background screening firm. In January 2019, ESR News reported that consumer complaints involving the FCRA reached 4,531 in 2018, increasing 4.3 percent from 2017 to 2018, and have risen in number every year since 2011, according to the latest report from WebRecon CEO Jack Gordon.